November 3rd, 2022: a little over 2 weeks since the release of Ardour 7.0, we're back with a mostly-bug-fix release driven by the excellent testing and reporting of some intrepid users. Somewhat embarrassingly, there were a lot of serious bugs in our much-touted new time representation system, most of which we have now fixed. This was particularly obvious in sessions involving multiple tempos, something sadly diminished in the present era 😀 We deeply appreciate the feedback, and have worked hard to fix as many of the reports as we could. Some of the fixes are extremely important, and we felt it was right to get a new release out as soon as possible. Over the coming weeks, we will continue to work on bug fixes but hopefully shift some attention back towards new features and design/workflow improvements.

If you're not yet familiar with the massive changes in the 7.0 release, this video may help get you up to speed

Release notes for other older versions are linked in the list below.

Ardour now has a Quick Audio Export feature that expects you to do just two things: select exporting file format and the extent of what is being exported (whole session or a range selection, if one is present).

Timing revamp was one of the major changes in 7.0. This is where we eliminated the reason why many MIDI-related bugs were possible in the first place. In 7.1, we fixed a few more bugs that could be reproduced when creating new MIDI regions or trimming existing one in the part of the timeline where a tempo ramp is happening.

The Cue Markers ruler now has Clear All Cues command in the context menu. We also added the Cue Markers option to the main menu (View -> Rulers) which we overlooked when releasing 7.0.

The folder where files from FreeSound are downloaded to is now also listed in the clips list.

In some cases, users might want restoring a mixer scene only for a selection of tracks, e.g. to an entire set of drum tracks but not the guitars or the keys. It is now possible to do so: select tracks of interest in the mixer view, right-click the mixer scene restore button, and choose Restore for selected tracks.

We revamped the UI for external sends and returns (port inserts). The dialog now has gain and panning control, polarity control, and allows customizing latency. 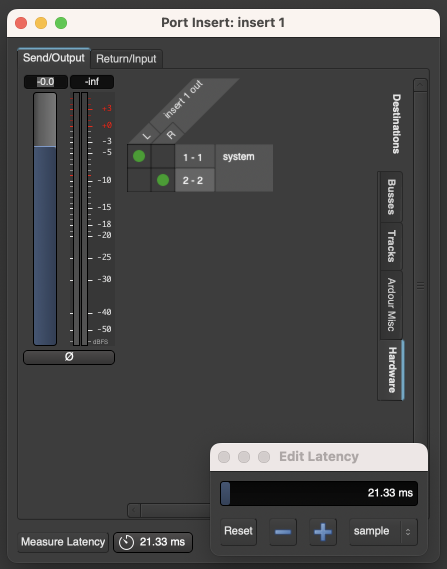 We improved the readability of the X-axis units in the export spectogram. Before, Ardour distributed time labels evenly but with odd times depending on the export range extent. Now, it rounds the interval down to nearest power of ten ... and if suitable, scales that up with a factor of 2 or 5. This will make sure that the time labels are nice with a minimal amount of non-zero digits. That makes it easy to do math and interpolate when reading the graph.

Additionally, the total length is no longer the right-most label, but the length can be found in the top-right corner.

Picking automation nodes with a mouse could be difficult: the position would have to be very precise, so we adjusted the proximity threshold to make it more tolerant to the mouse position.

There was another issue users ran into. When automation lines with significant change are zoomed in time, the slope gets smaller (towards horizontal) as the control points moves further away from the visible area. That was rendered correctly, but the corresponding mouse events happened as if the line had a steeper slope. So now the Y values are scaled when X values are clamped.

And then we changed to the way automation lines are drawn to show edge-lines. This adds points to the lines so that they always extend to the edge of regions (not control points).

Even more improvements to automation editing are coming in the next updates of Ardour.

We changed internal gears where tempo map editing is involved. This allows for cleaner implementation of editing tempo markers and tempo ramps, with less bugs. Additionally, we made dragging tempo markers smoother, fixed a few crashes, and made a few more improvements all around.

New Options in the Preferences dialog

We now provide two more options in the Preferences dialog.

The main The Plugins page now allows choosing whether the Plugin Manager should be automatically opened when plugins are found missing upon opening a session.

The Plugins -> GUI page now exposes a plugin GUI behavior option we added in version 7.0. It allows choosing what to do with plugin windows when closing them. Hiding means a plugin window is stored in the memory, can be re-opened faster than from scratch, but it also takes resources. Destroying means the plugin window will be re-created form scratch the next time the user opens it. Ardour also allow treating VST2 and VST3 plugins differently because of specifics of the respective plugin APIs.