Instruments for Use with Ardour 3

With Ardour 3 alphas coming thick and fast, and the beta looming on the horizon, I thought it was high time to examine the soft-synths that are available for use with it. While support for other synth plugin formats, like DSSI and native VST, may come in future releases, Ardour 3.0 looks set support only LV2 synths (though it of course supports LADSPA for effects, too). That obviously limits the selection somewhat, but there are still some nice synth plugins on offer.

Of course, Ardour 3 works just as well with external JACK synths, and with hardware synths, so you can still use old favourites like Hydrogen or Yoshimi, but using plugins certainly makes things easier when saving and loading projects.

NOTE: Some of these synths rely on a library called lv2-c++-tools. Versions of this library before 1.0.4 include a bug that prevents Ardour from loading any synth plugins built against it, so if some of the synths listed here fail to load for you, make sure you check your lv2-c++-tools version.

The Calf plugins are some of my favourites — the Flanger, Phaser, MultiChorus, and Vintage Delay are all great — and it comes with a couple of synths, too. Calf Monosynth is a classic analogue-style monophonic synth; it handles legato just like an old monosynth, which is something that a lot of soft-synths mess up, so it’s great for both electro basses and proggy leads. The git version adds LFOs and a modulation matrix. 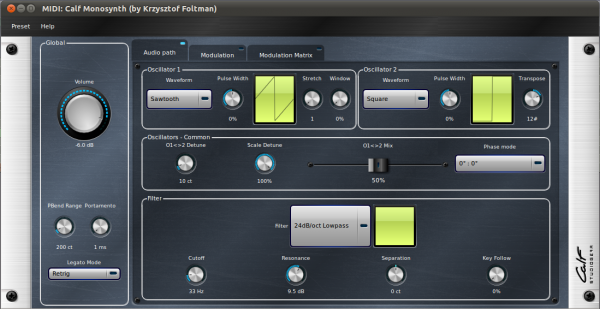 Calf Organ is based on a drawbar organ; rather than emulating a specific organ it takes the basic idea and expands on it. You can adjust the harmonic and the waveform of each drawbar, and independently pan and detune them, too. It also has a pair of resonant filters, and three envelopes for modulation, which make it capable of all sorts of synth sounds beyond what you’d expect from an organ. 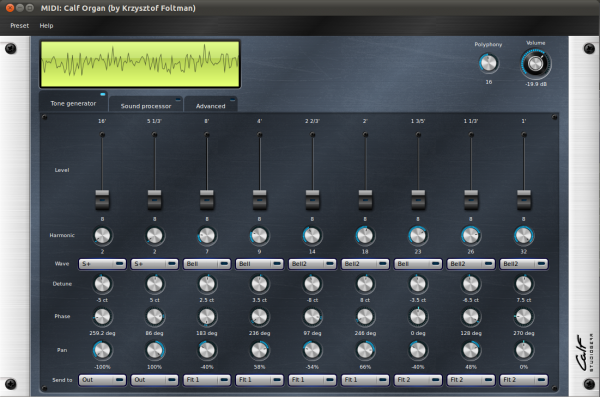 Calf Fluidsynth does what you’d expect it to do — it lets you load SF2 soundfont files, using the Fluidsynth engine. It’s only available in the git version of Calf, and it’s marked as experimental, so you have to enable it explicitly when configuring the build. Despite all that it does seem to work, though I haven’t had a good chance to really put it through its paces yet.

If you do want a classic organ, foo-yc20 may fit the bill — it emulates a Yamaha YC-20 combo organ, down to the tacky red background in the UI. It does a great job of emulating those cheesy 70s organ sounds, and it works really nicely through a chorus or rotary speaker plugin.

The MDA plugin set, which contains a variety of synth and effects plugins, has long been popular on Windows, and since going open-source a couple of Linux LV2 ports have appeared. Dave Robillard has ported the effects plugins, but he hasn’t yet started on the synths. The lv2-mdaEPiano project has ported one of the synths, though — the electric piano. It’s a very nice little synth, with a great sound and low resource usage.

lv2-mdaEPiano has its own GUI, but it’s a bit plain — I actually prefer Ardour’s standard plugin GUI controls. Thankfully, you can bring up a standard Ardour GUI for it (or any other plugin, for that matter) by right-clicking on it in the plugin list and selecting “Edit”. lv2-mdaEPiano uses lv2-c++-tools, so make sure you’ve upgraded that to 1.0.4 or later before installing it. 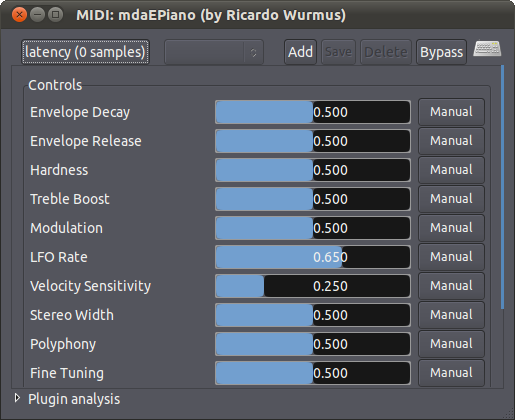 lv2-mdaEPiano is a port of the MDA EPiano VST plugin

These three plugins started as stand-alone JACK synths, but they were ported to LV2 by Jeremy Salwen:

I wasn’t sure about using LinuxSampler as a plugin initially, but it actually seems to work quite well! When you add the LV2 plugin within Ardour, you don’t get a GUI — it just launches an instance of LinuxSampler in the background and defines a MIDI input and audio output. Then, you can fire up LinuxSampler’s Fantasia GUI to load the instrument you wish to use. It’s a little clunky, but the settings are all saved as part of the session and restored when you reload it, just as you’d expect with a plugin.

I’m not sure how to describe this one, though words like “bizarre”, and perhaps “insane” certainly come to mind. The Newtonator uses some unique forms of synthesis, which are extensively, and entertainingly, in its manual. Its sound starts off as a simple sine wave, but after a few quick adjustments of some of its modulation parameters you find yourself knee-deep in some rich, distorted sonic mayhem. 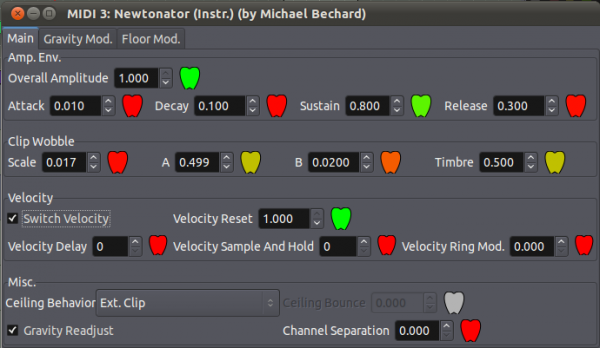 The Newtonator creates sounds that are harsh, distorted, crazy, and very cool

Like SO-KL5, Qin is a little string-based synth; it simulates plucked strings using a pair of oscillators and a pair of filters. Being monophonic limits its usefulness, but it can make some nice sounds. 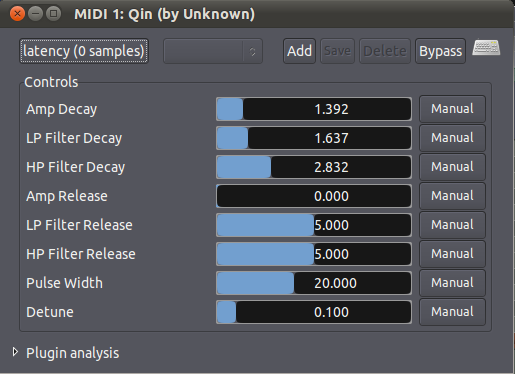 The ll-plugins plugin set contains two quite unique synths: Sineshaper, a monophonic synth based (unsurprisingly) on sine waveshapers, and Rudolf 556, an analogue drum machine emulation that creates bass, snare, and hat sounds. Even with the updated version of lv2-c++-tools, Sineshaper doesn’t work in Ardour for me, but Rudolf 556 does. 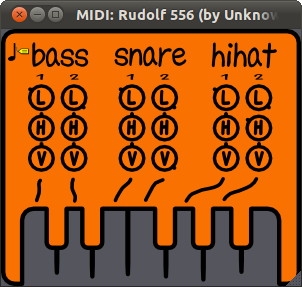 Composite Sampler is the plugin component of the Composite project, which aims to create a realtime sampler and sequencer based upon Hydrogen. The sequencer itself isn’t usable yet, but this plugin, which plays Hydrogen drum kits, works just fine (as of version 0.006.1). With no GUI to speak of it’s a bit fiddly to use, but the release announcement includes basic instructions.

There are some others that I either haven’t tried or couldn’t get working, or which simply aren’t finished yet. If anyone else can elaborate on these, let me know in the comments so that I can improve this article in the future:

Have you had better luck with some of these? Have you found any that I haven’t listed? If so, let me know in the comments!